The scene looked so familiar to NBA fans. With only 2.5 seconds left in a tied postseason game, San Antonio inbounded the ball, a Spur dribbled toward the basket and then sank the winning 20-foot floater to stun Boston in a quarterfinal playoff game.

It looked like the Spurs’ iconic coach, Gregg Popovich, the winner of five NBA titles, had worked his magic again. Except that after the winning play a commentator said, “Just like coach Hammon drew it up.”

Who? He was referring to Becky Hammon, who on July 11 became the first woman to be the head coach of an NBA Summer League team. Saturday’s winning shot by her player, Shannon Scott, raised her team’s record in the Las Vegas Summer League to 4-1 and qualified them to face Atlanta in Sunday’s semifinal.

They overcame a 12-point deficit to win that game, and then squeezed past Phoenix 93-90 on Monday to win the Las Vegas Summer League championship in Hammon’s head-coaching debut. After losing her first game, Hammon led the Spurs to six straight victories.

Those last three games were perfect examples of  why Popovich hired her as the NBA’s first full-time female assistant coach last season. He has highly praised Hammon, a longtime WNBA star guard, while comparing her to three excellent NBA coaches he helped groom.

“She talks the game,” Popovich said. “She understands the game. So for all of those reasons, you really know she’s got that same sort of Avery Johnson, Steve Kerr, (Mike) Budenholzer type thing.”

At the age of 66, Popovich soon will start his 20th season as the Spurs’ head coach. He has said he will complete the remaining four years on his contract. Maybe by then, or before then, the noted wine connoisseur will be ready to retire to spend more time sipping his private wine label Rock & Hammer Pinot Noir.

Despite all of his championships, the boldest and most unique part of Popovich’s legacy would occur if he hands the head-coaching reins to Hammon.

Hammon is fortunate to have the strongest advocate she could ever wish for, a future Hall of Fame coach who commands so much respect that if any Spurs player balks at taking orders from a woman, he should just keep that thought to himself. As all of us who grew up with a strong father figure remember, there are some things you just don’t want “Pop” to know. 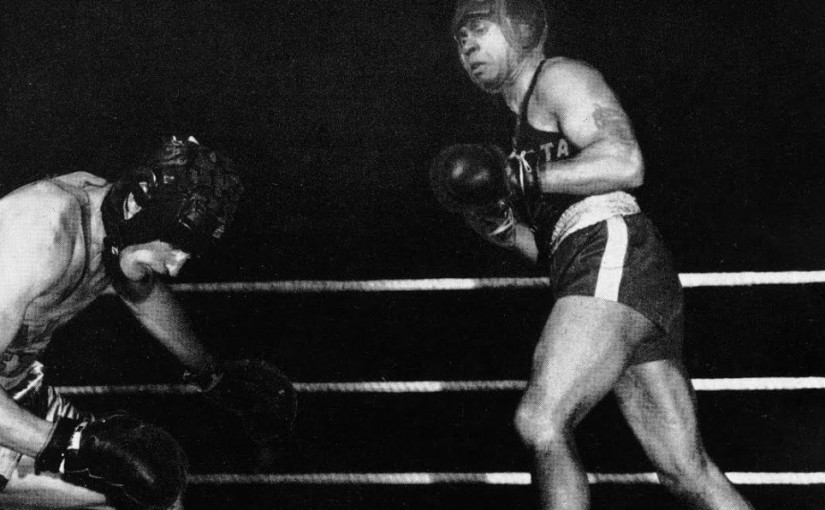 Image caption: Bill McMoore carried a menacing right hand when he entered the ring, just waiting for a jaw to be exposed. This falling San Jose State boxer felt McMoore’s power in their 1951 match.

(The following is the introduction I read before presenting McMoore with a Pioneer Award from the National Association of Black Journalists Sports Task Force on August 7.)

When Bill McMoore graduated from the University of Minnesota, Harry Truman was president, “I Love Lucy” had not debuted on TV yet, and the NBA still was playing without a shot clock.

It was 1951, and if Bill wanted to view the university’s black representation on the football and boxing teams, and in the Education Department, all he needed was a mirror. In all three cases, he was the entire brotherhood. Yet, he persevered.

As a boxer, succeeding was a breeze because his coach was so supportive. “He was more of a father-like coach, so I didn’t feel discriminated against,” McMoore, now 89, recalled. “Ray Chisholm was a very nice guy.”

McMoore responded to his support by becoming the No. 2-ranked lightheavyweight in NCAA rankings, back when boxing was a sanctioned sport.

“I had a good right hand,” Bill said. “You had to worry about that…. Straight right hand to the chops.”

However, McMoore seldom played in a football game. He believes that he was discriminated against, but he refused to quit the team. “That was just ingrained in me,” he said. “I didn’t want to give up in anything.”

Bill began his teaching career in 1958 at Minnesota South High from where he graduated, and in the early 1980s he became the district’s director of health, physical education and athletics. He used that authority to add color to the sidelines, including giving Sports Task Force member Charles Hallman his first coaching job.

Charles was teaching young kids basketball one day when a parent complimented him and asked if he coached high school ball. When Charles said no, the parent said he knew someone who could hire him. A few days later, Bill called and asked for his resume.

That was in 1984, and soon Charles was an assistant coach. Today, he’s still coaching in Minneapolis schools and so are both of his sons – all part of McMoore’s legacy.

But Bill is most proud of how hard he fought to get women hired as coaches. “If a man could find benefits from coaching in sports, why shouldn’t women?” he said.

Bill retired from the school district in 1989 and became director of community relations for the NBA’s Minnesota Timberwolves, where he started an internship for minorities by recruiting from HBCUs. One of his finds was Terrell Battle from Winston-Salem State, who now is General Manager of Lifetime Fitness in Minneapolis.

So Bill, please come to the podium to accept our award for being a black pioneer in so many ways for so many people for so long. Image caption: To honor his great career and his retired No. 6 jersey, the Minnesota Twins dedicated this statue to Tony Oliva in 2011 at Gate 6 at Target Field.

(The following is the introduction I read before presenting Oliva with a Pioneer Award from the National Association of Black Journalists Sports Task Force on August 7.)

If not for Fidel Castro, Tony Oliva probably would not be one of our honorees today.

One of the great hitters of the last half-century, Oliva was raised in rural Cuba, where baseball is revered. He played only on Sundays, and he learned how to hit as his brother pitched to him.

“I told him any time you strike me out you get a nickel, and he had to work hard to strike me out,” Tony said.

In 1959, Castro overthrew the dictatorial Cuban government. The next year, the Washington Senators signed Tony to a contract before moving to the Twin Cities, and in January of 1961, the U.S. broke off diplomatic relations with Cuba. Using his brother’s documents to leave, Tony (whose real first name is Pedro Jr.) was allowed to fly first to Mexico and then to the States for a tryout with 21 other Cuban players. They were the last baseball players to leave Cuba without defecting.

The lucky break that made a career

At spring training in Fernandina Beach, Florida, Tony was cut presumably because of poor fielding, but he believes racism was the real reason. Only two minor-league teams were left in spring training when the Cubans had arrived. The Erie, Pa., team had already chosen one black player, and the other team from Florida didn’t want any, so Tony was supposed to be sent home. But because of the Castro-U.S. feud, there were no boat or plane rides to Cuba.

A minor-league manager named Phil Howser got a rave report on Tony so he paid Tony’s expenses until Howser found a team that would take him in Wytheville, Virginia. There he hit .410, and a stellar career was born.

Unlike many of today’s hitters who will get a three-ball count and then settle for a walk, Tony stayed aggressive at the plate. Regardless of the count, if a pitcher threw what he calls “a Cuban sandwich,” Tony tried to crush it.

He made history by leading the American League in batting in his first two full major-league seasons, hitting .323 in 1964 and .321 in 1965. Despite a serious mid-career injury that resulted in eight surgeries and a replacement of his right knee, from 1962-76 Tony batted .304 with 220 home runs, 947 RBIs, 8 straight All-Star Game appearances and five finishes among the top 10 vote-getters for the MVP award.

Last year, Tony was deeply disappointed when he missed being selected for the Hall of Fame by one vote. But this year brought him joy when President Obama re-opened U.S. diplomatic relations with Cuba.

“Hopefully, more people will enjoy a chance to enjoy Cuba and see for themselves what kind of people Cuban people are – very nice, very friendly,” Tony said. “I have five brothers and sisters and I go back every year.

“Now I have two countries. I live 55 years in the United States and 21 in Cuba. I am very proud of both countries.”

Tony, please come to the podium for being one of the most lethal hitters of our time. 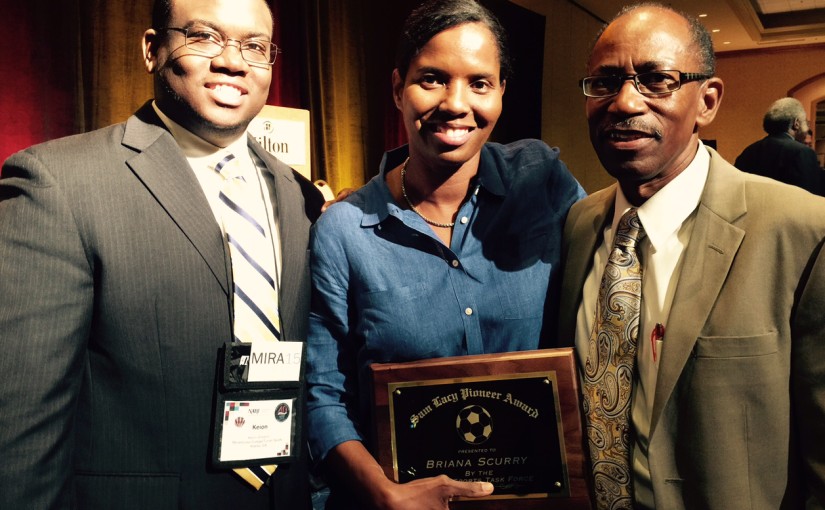 (The following is the introduction I read before presenting Scurry with her award from the NABJ Sports Task Force.)

The pitch has been Briana Scurry’s home since she started playing soccer on a boys’ team because there was no girls team. She was 12 in Dayton, Minnesota, and the coach made her goaltender to keep her out of harm’s way. Wrong concept.

Describing goaltending, she said, “The best analogy was one I heard when a pilot was doing a speech and said flying is absolutely hours and hours of monotony, coupled with instances of sheer terror.”

The ball is away from a goaltender almost the entire game, “Then 21 people are trying to crash into your space,” Briana said. “It’s very difficult because of the pace, and people’s intuition is to avoid objects, people and knees coming at you, but as goaltender you have to go TO that stuff.”

Her daring led Briana to become the most successful African-American soccer player in history and to be named on U.S. Women’s Soccer’s all-time best team after participating in 133 victories (including 71 shutouts), only 12 losses and 14 ties.

The coming out that wasn’t

She also made social history in 1999 when Briana became one of the first high-profile athletes to come out publicly as a gay person. You don’t remember that? There’s a reason why.

Just as Abby Wambach ran to the stands to kiss her wife after America’s World Cup victory last month, Briana ran to her girlfriend after winning the 1999 championship in which she made a title-saving save. “But,” Briana recalled, “ABC cut away when they realized I was kissing another woman. So, that was my coming out.”

Fact is, Briana has never hidden being gay and speaks out frequently on diversity and LGBT issues.

Her career ended in 2010 when an opponent accidentally kneed her in the side of the head. She completed the first half of the game, walked to the bench leaning to one side, and never played again.

The blow gave her a concussion that, according to Sports Illustrated, afflicted her with three years of severe headaches that made it very difficult for her to concentrate, socialize, write, walk or do soccer commentary. “After a while I started to get depressed,” she told SI. “My brain chemistry had changed. … My mind was broken.”

Her life was put back on track after neurologist Kevin Crutchfield figured out that a nerve that went from the spine to her neck to the back of her head had become intertwined with a muscle. A 2013 surgery removed the nerve, ended the headaches and started her path toward normalcy she’s still striving to achieve.

Protecting the future of women’s soccer

Especially because girls playing soccer are unusually susceptible to concussions, Briana has become an outspoken advocate for concussion awareness and criticizes soccer federations that underplay the problem.

She asked, “Can we please do something before parents think, like football, that soccer’s too dangerous?”

Soccer needs someone to save itself from ridicule. Who could be better for that task than Briana Scurry? For all that you’ve contributed to your sport and to our enjoyment, please come get your Pioneer Award.